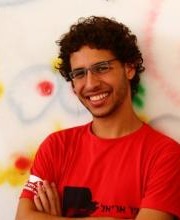 Elad Eisen is a graduate student in an individual program under the supervision of Dr. Eitan Grossman, writing his thesis on typology of borrowed sounds. Main areas of interest include Semitic languages in general and dialects of Neo-Aramaic in particular, as well as typology, historical linguistics and applications of corpus linguistics. Awards and prizes: the Mandel Institute for Jewish Studies excellence prize (2016-2017), Rector's List for academic achievements (2016), Rector's Award for academic achievements (2014) and an excellence prize awarded by the Department of Hebrew Language (2014).