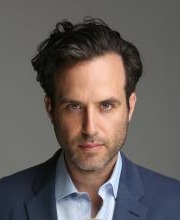 benjamin.freidenberg@gmail.com
View bio
Benjamin Freidenberg is a film director who graduated with honors from the Sam Spiegel Film & Television School Jerusalem. Parallel with his work in the film industry, he studied linguistics for a bachelor's degree and is currently completing his master's degree. Supervised by Dr. Elitzur Bar-Asher Siegal, his research focuses on the linkage between historical linguistics and the development of the filmic craft, specifically targeting the syntax and semantics of film. This interdisciplinary study which engages linguistics and cinema studies, involves semantic changes of verbs indicating object movement ('to give', 'to deliver', 'to retreat', 'to approach', etc.) and compares it with historical changes in the meaning of camera movement in films.  Among his research interests: historical syntax, aesthetics, metaphor and metonymy, visual vs. textual aspects of Egyptian hieroglyphs and history of the arts.
Member of the Israel Film Academy and contributor to film preservation projects at the Israel Film Archive in the Jerusalem Cinematheque and the Judaica Division Images Collections of Harvard University. Recipient of the America-Israel scholarships for outstanding artists and the International Association of Film & Television Schools' prize for outstanding filmmakers and scholars.